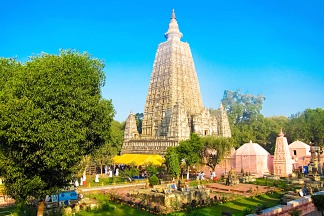 The Mahabodhi Temple (literally: "Great Awakening Temple"), a UNESCO World Heritage Site, is an ancient, but much rebuilt and restored, Buddhist temple in Bodh Gaya, marking the location where the Buddha is said to have attained enlightenment.  Bodh Gaya (in Gaya district) is about 96 km (60 mi) from Patna, Bihar  state, India.

The site contains a descendant of the Bodhi Tree under which Buddha gained enlightenment, and has been a major pilgrimage destination for Buddhists for well over two thousand years, and some elements probably date to the period of Ashoka (died c.232 BCE).  What is now visible on the ground essentially dates from the 7th century CE, or perhaps somewhat earlier, as well as several major restorations since the 19th century.  But the structure now may well incorporate large parts of earlier work, possibly from the 2nd or 3rd century CE.

The temple complex includes two large straight sided shikhara towers, the largest over 55 metres (180 feet) high.  This is a stylistic feature that has continued in Jain and Hindu temples to the present day. 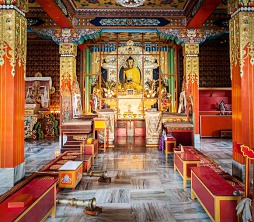 As soon as one enters the temple room he will see the large Diety of Lord Buddha sitting comfortably on an asana or sacred seat.  The predominant colours are usually red, orange and gold.  There are small benches to kneel on connected to a reading table and small cushings to sit on.

An array of gongs, hand cymbals and drums may be played by the priests.  The temple will have a very peaceful atmosphere due to the prayers and meditations of all the priests and guests over many years.

On a tight budget this Winter?

Can't afford the coach to visit a Temple, Mandir or Gurudwara?

BHS can bring it to you instead!

​Too much risk assessment, pupil letters and other logistics to deal with?

Why not have our Virtual Visit to your school and cut your costs by up to 80%, save headaches, letter writing and reduce the risks!

Wesak Buddha Day falls on May 4th 2023.  Contact us today to book a workshop and claim your discount!
Buddha's Teachings

"The prime purpose in this life is to help others.  If we can't help them, at least don't hurt them..."